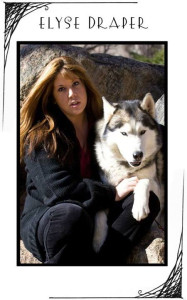 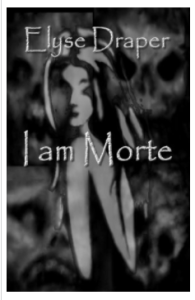 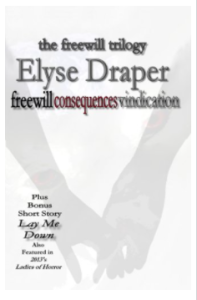 1) Back in 2012, you self-published the ‘Freewill’ trilogy. One of the things I like in these books is the abundance of strong female characters. Where did you get your inspiration for the character Ellie?

I genuinely believe that virtually all women have strength, brilliance, and a deep profound beauty inside of them. Unfortunately, at the time of the series release, our entertainment outlets were still woefully light on providing strong female characters. Or, the female characters were caricatures that depicted the idea of “power” as mimicking a shallow representation of “male strength.” I wanted to break the stereotype; I wanted to make my character’s superpower unconventional in its spectacular normalcy.

As a student of the human condition, I see these spectacularly normal traits in most people, regardless of gender, sexual orientation, personal identity, race, or providence. For me, the most valid measure of any unquantifiable trait (whether internal strength, intellect, or piety) can be found in the ability to embrace compassion and empathy over ego and prejudice, by using a heathy dose of critical thought, insightfulness, basic decency and mindful consideration. True strength comes when we never stop striving to understand our own definitions of who we are, what we want to give to benefit the world around us, and our willingness to live by those lessons.

Ellie, was inspired by you- the reader, by my sister, by my daughter, by the terminal children I have watched over and the weight of their parents’ grief, the stranger on the corner who shows random acts of kindness, and by humanity’s treatment of each other. Ellie was always her own creature, frightened and overwhelmed, courageous, and free; I simply watched her grow and wrote the biography.

2) You originally wrote ‘Freewill’ for the New Adults genre, but adults of any age enjoyed the story, too. Why did you write for New Adults? And why do you think adults enjoyed it, too?

My daughter was three years old when 9/11 shook the United States. I remember her walking out of her bedroom that morning, hair sticking up at odd angles wearing bedhead chic and rubbing sleep from her eyes. I remember her asking me why I was crying. I remember thinking that her childhood was going to be drastically different than mine; and in many ways, I grieved for her innocence.
As I watched, righteous anger and justified fear, transformed into questionable wartime tactics, xenophobia, and zealous patriotism. Cassie was growing up with a generation that witnessed friend’s families lining up to fight terrorism, brave men and women who were not going to come home. This became part of their daily lives, along with censorship, overt invasions of privacy, extreme heightened security … and funerals. So many years passed by, and her immediate friends and family, children when the towers fell, children who grew up participating in school shooting drills, children who couldn’t imagine wearing shoes through airport security, and children who learned a practical understanding of economic downfall when they couldn’t afford school lunches, those ‘now, young adults’ began leaving for war.

These young minds grasp ideas like responsibility, hard work, consideration, and compassion, speaking out against fear, and pleading for their voices to be heard in the face of the world they are going to inherit. They are frightened and overwhelmed, courageous, and free. I wrote the series for them, for the experienced minds that grew up so much faster than their years could have predicted. I wanted to give them a fantasy that did not speak down to them; one that showed them respect.

Although writing for adults was not my original intent, it makes sense that those young adults’ wisdom is shared in older age groups. The ideas expressed are very adult (death, faith, prejudice, free will, profound grief, accountability, and the strength found in compassion and empathy) this generation can feel the story, hell, they have been living it their entire lives. So many of us, no matter our age, have been living it our entire lives.

3) You are currently working on a new writing project, this one aimed at adults. What is ‘Overtaken’ about?

I believe that the ‘Overtaken’ series can and will be read by young adults as well… however, the language and scenarios are decidedly not fantasy, and in no way warm and fuzzy.

The plot follows the planetary threat of human self-absorption that results in war, pestilence, and climate crisis, thus bringing about the forced and manipulated evolution of mankind, or their extinction.

Three groups:
The Watchers: humans that have bonded with ancient symbiotes that passed the eons in the deepest trenches of our oceans. These symbiotic creatures change the physical makeup of their hosts through manipulation of stem cells, while also cognitively cohabitating within their hosts’ minds. They are charged with observing humanity’s destructive nature and narrating the almost certain extinction event that will end human life on the planet. Or, at least, they are only supposed to be observing.

The Takers: Narcissistic humans, soaking in the slop of their own self-interest, self-appointed power, and the domination of everything they think is “lesser than.” These diseased, these mentally ill are scrutinized through the unique vision of the Watchers and are so much more profoundly disturbing than humanity realizes. And, it is spreading… even though manipulated and false, the power is seductive to those who want to rule, or at least emulate authority over something, anything. Will this be what leads to the destruction of the human species?

The Givers: as the name implies, are the sections of human populous, who think of more than themselves. Before the fall, they find themselves forced to live at the feet of the more cunning, spiteful, and destructive takers… most without giving a second’s thought to the degradation. They may not be as equipped to fight; but they are certainly more than simply gifted in survival. Will they be our salvation?
The setting is an alternative universe, a planet that is geographically similar to ours, and a history very much like our own. The timeline spans hundreds of years, allowing for a cultured and rich story.
Is a dystopian event inevitable? What will be the catalyst, or the cause? Will we survive? Do we deserve to survive?

4) We’ve heard of trills, symbiotes, etc, in Star Trek and Stargate. How different are yours?

Well, Overtaken’s symbiotes give their hosts long life, increased strength, camouflage, and the fighting attributes of known predators – some of these traits do coincide with the examples you mentioned. However, their essence is not held in a relatively large parasitic organism that lives inside of and separate from the hosts; rather, the symbiosis is a physical bonding that occurs on a cellular level. The shared mental attributes in most popular Sci-fi, considering symbiosis, usually paints images of an internal struggle for control… or the loss of one consciousness over another. Overtaken’s symbiotes share consciousness with their hosts, cohabitating like roommates trapped in the same house. Needless to say, they don’t always get along.

5) Where did you get your inspiration from for ‘Overtaken’?

Given the storyline, I think it’s safe to say, current events weighed heavily on the plot. However, as I started writing this series nine years ago, a large portion of my inspiration has come from my personal experiences with being on the receiving end of those with narcissistic personality disorder.

No matter what we have experienced in our lives, we are never alone in our heartache, betrayal, and torment or joy, forgiveness, and enlightenment. We are all connected … art exists to remind us of that fact. That will forever be my inspiration.

6)  It has been said that ‘Freewill’ was a dark and light fantasy and a paranormal romance. What is ‘Overtaken’?

The genres are Science Fiction, Dystopian Fiction, and new to speculative fiction: Solarpunk.

7) Before ‘Freewill’, there was a captivating 10,000-word short story printed in The Ladies and Gentlemen of Horror 2009. ‘I Am Morte’ focused on Death developing anthropomorphic qualities and Death’s interest in a specific soul. How did ‘I Am Morte’ become to be?

Perry-Ann, my sister, was born prematurely on October 3rd, 1961, in an Air Force Hospital on the East Coast. Shortly after she was born, she contracted viral meningitis. Given the nature of the disease, it either had to run its course, or take her life. Unfortunately, she survived, in a persistent vegetative state for the next thirty years.

Pharmaceutical companies took advantage of teenaged Perry’s situation, a ward of the state, an emotionally compromised mother and non-existent biological father. Human experimentation, without parental consent, not even those “rich and powerful ones” could hide their deeds forever. I learned to share my home with amazing lawyers from the ACLU, and journalists. Lots of journalists. I grew up where words and ideas like dignity and peace, were tossed in a word salad with euthanasia, living wills, and Do-Not-Resuscitate orders.

As psychologically comfortable as one can be with hospice care, I was a perfect candidate to help families like my own. So, from 1991until 2011, I worked in-home-hospice from geriatrics to oncology, for the exceptionally old to the heartbreakingly young.  Saying that I have an unusual relationship with death, is an understatement. ‘I Am Morte’ is a manifestation of that relationship, and even more so, my relationship with life.

8) After ‘Freewill’, you contributed ‘Lay Me Down’ to The Ladies and Gentlemen of Horror 2013. This short story gets under the reader’s skin. Where did you get your inspiration from for this one?

After the Sandy Hook Shooting on December 14, 2012, in Newtown, Connecticut, I found myself trying to make sense of yet another school shooting, and why the lives of young ones were interchangeable with the right to own guns. How many possible futures, how much potential was lost, so that lobbyists and the corporations making money on guns sales and manufacturing could continue running business as usual? How grand was the manipulation from the greedy, to gaslight the frightened, into believing that having access to firearms was more important than the lives those guns were thought to protect? How frightened does a society need to be, to believe that the deaths of children are acceptable losses, sacrifices on the altar of capitalism?

Science Fiction allows for introspection, speculation, and imagination to run wild. There are no limitations to where the ideas can take you; the rules are simple … just tell your story.

I asked these questions and followed the rules; and I found hope in the idea that just possibly the potential was not lost after all. Maybe, just maybe, there is a spark in our collective unconsciousness that speaks for the lost ones. What if the pain of those who have suffered at the hand of elitism could share their wisdom through their loss, and help to heal our future?

And after that, Elyse Draper went back to her busy life with a reminder that ‘Overtaken’ would also be a trilogy.
I suspect there will be cliffhangers…… 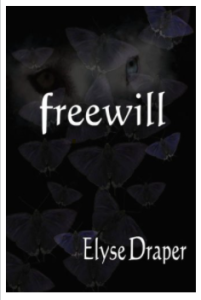 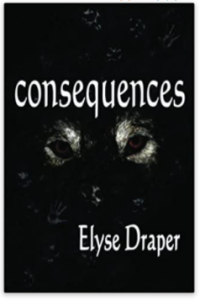 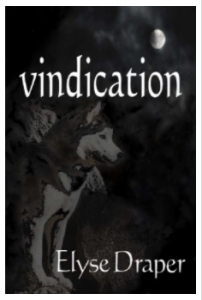